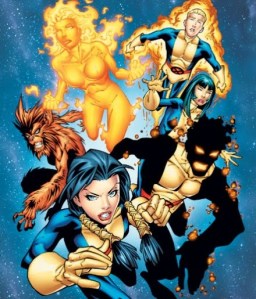 random manishtana fact no 78: i worked in a comic book and videogame store for eight years. and im a proud dc boy. superman. bats. flash. justice league. yknow. see, i never got the marvel universe.

actually, more to the point, i never got the deal with how the marvel universe reacted to mutants. everyone hated them. black, white, asian, gay, straight, everyone. that just didnt seem very realistic to me. was the marvel universe a world that never experienced slavery? jim crow?the holocaust? the japanese interment camps? that was the only way it made sense to me for everyone to be on board that mutants were all horrible and evil–if they themselves had never endured the same tyrannical oppression.

then, this past week i had a conversation with a co-worker of mine, an older jamaican woman. [i mention this b/c she’s 1-old enough to have lived through the civil rights era, 2-she’s jamaican, and therefore doubly well aware of how negative/derogatory stereotypes are slapped onto groups]. we got around to discussing the shooting at fort hood, at which point she bursts out that we should just round up all them muslim and send them back to where they came from b/c they keep killing ppl and she’s tired of it. and–get this–she even directly references the japanese interment camps as a positive example for precedent!

Read on over at MaNishtana: To Me, My Idiots!