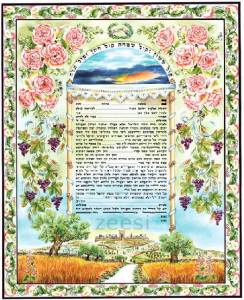 I went to an Orthodox Jewish wedding in Los Angeles and a woman read the ketubah. Whoa. She did it better than I’d seen any other rabbi do it before (and I’ve been to a lot of Jewish weddings). But some people couldn’t handle it. Rabbi Yosef Kanefsky published an illuminating piece about those “some people” that everyone needs to read: “When Will the Slander End?”

“Put forward by numerous rabbinic writers in a variety of contexts, it declares that whenever Orthodox women perform ritual practices that are traditionally associated with men, their motivation is invariably subversive. Women who read a ketuba (or who recite Kiddush or HaMotzi at the Shabbat table, or who take a lulav, or who wear a tallit when they daven) are invariably engaged in an act of religious disobedience, cynically utilizing religious practice as a means of expressing their rebellion against perceived unfairness or injustice in Orthodox life. Thus, not only do their acts lack religious value, they actually constitute sin.“

Frum or feminist? You can be both according to JOFA: The Jewish Orthodox Feminist Alliance that gave me the heads up on this lovely piece by Rabbi Kanefsky. I spent most of last Shabbat reading their amazing quarterly newsletter which featured everything from articles on head covering to Jewish women’s dress throughout the ages and across continents.

Last summer, I attended a fascinating Shabbos “Nosh & Drosh” lecture given by Rabbi Yosef Kanesfsky, spiritual leader of Bnai David Judea, where he discussed the role of women in his community. Before I get into this any further, I want to say that I have thoroughly enjoyed all of the Shabbat learning experiences provided by his synagogue. I became a “Nosh & Drosh” groupie after Rabbi Kanesfsky’s presentation on how coffee can (or can’t) be prepared on Shabbat.

Rabbi Kanefsky stressed the importance of tradition in a riveting, detailed lecture on the halakha surrounding rituals women in his community take part in, from heaving the Torah scroll through the women’s section to participating in women’s prayer groups.

Understand that I am one of those women who has no interest in dancing with a Torah scroll (I’d drop it and die of embarrassment) or singing along in a women’s prayer group (my mangled Hebrew warbles should be between me and G-d alone).

I am quietly feminist (though I was raised to believe that men and women are not equal, because women are better than men). I came from a Catholic upbringing where priests and nuns have very different proscribed roles as clergy members. I once wanted to be a nun and an altar girl but you know, things change so instead, I became Jewish.
And now that I’m Jewish when I have a strange question, especially one that relates to underwear, I’d much rather go to a Maharat or a Yoetzet Halacha then the local bearded guy any day!

My Jewish Learning looks at how “though the Orthodox rabbinate remains all-male, some Orthodox women have assumed para-rabbinic roles.”