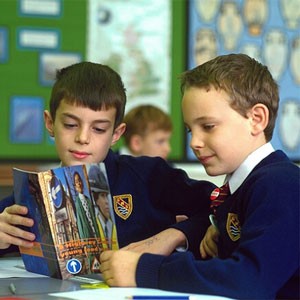 Another regular day in the Yeshiva of Hogwarts….

I live in my own little bubble. For the most part, my close friends are in their 20s. They are either starting their families or have infants and I’m hoping that they didn’t read “Applying for Day School Aid: A Degrading Experience” in Jewish Week. (I’m still catching up on my reading from when I was away for Pesach.) I talked the article up, which is about the process of applying for financial aid in Jewish day schools, at my Shabbos afternoon meal and my friend retorted, “The price of tuition at day schools is the best form of birth control.” After reading the current price of Manhattan nursery schools, I agree.

Unless I finish my book and get picked up by Oprah (I can dream!), I can’t fathom paying thousands of dollars in private school tuition. That’s probably why the RCA (Rabbinical Council of America) now makes people sign on the dotted line to agree to this kind of stuff when they convert their adopted children. I thought this was all fine and good but no one ever sat me down and said, “You will be paying what used to be your entire salary for a year so your cute Jewish kid can go to a nice Jewish school.” My Twitter friend assures me that this is just another “test of faith”. Like me, he can’t afford (but is somehow financing) the dream of day school. I thought when I suspected Judaism would make me broke that I was just exaggerating.

So my other friend says, “What about public schools?” I went to public schools in New York City. It was terrible (save for some great, inspiring teachers) and it wasn’t until I made it to an art high school in Manhattan that I stopped hating it and that was only because I discovered Advance Placement English, which was heaven. I was often bored in class. I was often ahead of my classmates. And I often felt like my teachers were teaching to the bottom 10% and leaving the top 10% behind. When I went to a private university and discovered classes where professors taught to only a handful of students, I almost keeled over and died. When I later taught in public schools, I discovered I almost always loved the kids (until I almost killed them sometimes) but not the system.

But hey, at least in public schools, I know that people are qualified to teach me kid. Mostly. It worries me when I hear about people teaching in day schools without actually having education degrees. Look, some people are born teachers. Any amount of education about teaching is just going to enhance their natural gifts. But this is not the case for everyone so why aren’t all day school teachers qualified to teach my kids if I’m paying thousands upon thousands of dollars to make sure they get a quality education. It’s one thing to know what you’re talking about and quite another thing to know how to actually teach it. (That’s what I learned from my Master’s in Education, I think.)

All this talk reminds me of a Shabbat I spent in Teaneck where a mostly forty-something, wealthy crowd talked about day schools while I watched idly from my bubble. I remember thinking why are all these people with money so worried about the cost of day school? But right then, I didn’t actually know the cost of day school or think about what it meant to pay that out times four or five or six or more kids. Hence, getting back to my first friend’s argument in defense of birth control because it’s much cheaper though not as cute and cuddly, you know what I’m saying. This is not a good thing for the Jewish people.

So now that I’m actually thinking about kids (when am I not?), the dream of sending them to fancy Jewish day schools so they can be proper frum yidden (observant Jews) is…precarious. The Jewish Week article makes it sound like I’ll never be able to afford send my kids to day school, visit my relatives in the Dominican Republic (“because if you can afford to take vacations like that, why do we have to give you financial aid?”), let my in-laws retire without financing their grandchildren’s education and survive the financial aid process with my self-esteem intact.

Hmm, so what have you heard about homeschooling? And can I get an “Oy vey”?