Hubbie’s cousin is a Radio City Rockette. And last night, she almost became my creative guru. If it were up to her, I’d be giving art lessons, painting and writing up a storm…oh, and taking some risks.

I am not a risk taker. I have never had enough stability in my life to be willing to forgo some of it. The risks I’ve taken in life were mostly self-destructive. I think that deep down inside, I saw taking risks as self-destructive so I made sure the ones that I did take ended in failure.

I have a secret. I’ve been blessed with many gifts but I’ve always found them daunting. I can create exquisite artwork and I could do much more if I’d pursued it in high erducation. But I didn’t. And yet a few hours at the drawingboard transportts me to the years when a sketchpad and a notebook were never too far from my hands.

When I wasn’t sketching, I was writing. I wrote stories, plays, poetry and read anything and everything as if I was a starving woman and books were food. I daydreamed new characters and intricate back stories. I wrote the article that landed me the book contract in 20 minutes. I didn’t even break a sweat.

What I learned from the Rockette was something I think I already knew. I never really pushed meyself with either of my gifts. I didn’t think I was good enough and even when I did, I just didn’t want to take the risk. Didn’t want to risk being a starving artist. Instead, I prayed that I could be extremely good at one thing, something stale but lucrative. I wished that I could hide my secrets, these hidden talents, and for a long time I did. Always practical over creative.

And then I met my husband. He plundered my art portfolio and canvased the walls of my apartment in artwork. There are portraits here and figure drawings there and childish scribblings from long ago. When I couldn’t work, he urged me to write and on that suggestion, I landed a work-from-home internship at a family magazine.

I envy the Rockette. I envy people who have drive and ambition. I envy people who live their dream no matter the costs. She is a dancer. But I am only a very strictly freelance artist and writer, undercover, still worshipping the staid careers of friends who wish they could paint a portrait or write easily.

I sometimes think that if I’d been born a Hausman, not married one, things would have been different. My mother and father-in-law would have made sure I took all the right classes, had all the right supplies. Instead of sacrificing one talent for another, they would have pushed me to double major in writing and art. I would have been a creative tour de force, not racked with doubt and fear of failure and always, fear of success.

As a teacher, I was the consummate cheerleader to my students. I was the cheerleader I never had at home. Because though my mother bought me art supplies, let me enroll in art school, she ensured that I only had enough self-esteem to srvive, not thrive. And all the while, I watched as she decided to break my sister’s passion, by denying her the choices I was given freely. My sister can dance, sing, draw but my mother sent her to a public school instead of an art school as a lesson: You will obey me or suffer. And so we all suffered.

There are fleeting moments when I believe that I could take risk, put all my eggs in one basket, learn to sell myself as a true artist. Still, in the back of my mind, there’s that welfare child who doesn’t want to go hungry, terrified of instability and sicked by the prospect of a rocky road ahead.

My friends did not approve of my decision to study to become a fitness instructor last fall, though some friends were more open about it than others. Though, I was pursuing something I was interested in, it was no secret that I was ignoring my natural gifts on purpose. Becoming a yoga teacher still seemed more of a steady gig than a writer or an illustrator.

What would Michaelangelo had been without the Medici family sponsoring some of his greatest work. Would he have pushed himself anyway? Would he have found the support he needed from within? I don’t know. I think it’s easier for me to look for external support than it is to look within. Now I wonder if as a teacher, I didn’t push my students enough to find it within themselves to…just do it. 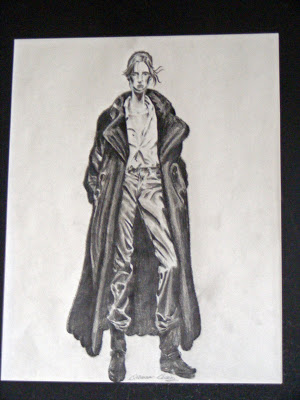