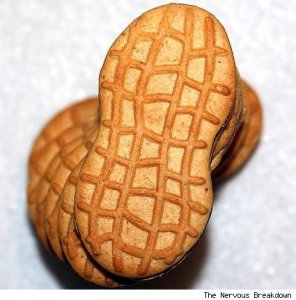 If you caught my last couple of Tweets on Twitter, then you know I made the most of flying all day from Los Angeles to New York. Boy, am I pooped and incidently, full of Nutter Butters, potato chips, Chex Mix (what diet?) and fruit (yes, I snuck some in).

While I was on the plane, I listened to Kanye West (who would have thought it? He was redeemed by Glee, not his apology to Taylor Swift), Elvis and Coldplay, even though all of their (Coldplay) songs sound the same. That nifty little tube in your seat on Virgin America airlines is…HOT!

On the plane, I also snuck in some time with my Kindle, too, reading the last of the altogether silly but satisfying Georgia Nicholson series by British Young Adult fiction author Louise Rennison, “Are These My Basoomas I See Before Me?” and despite a slow start, I laughed so hard at the end that I had to force myself to stop because people were staring at me.

As I Tweeted earlier, the movie about my flight would be called “Frummies on the Plane.” (Only the hair and the bright red shirt distinguished me from the other penguins!) Who knew there would be so many Orthodox Jews hightailing it out of Los Angeles at the onset of rain? Nice to be back in New York where it’s nice…and dry.

3 thoughts on “Nothing comes between me and my Nutter Butter…nothing.”