Mini Jews of color at play.

Last year, I begged my husband to take me to the Jewish Multiracial Network retreat. I think he rolled his eyes, asked me how much it cost and then rolled his eyes again. In the end, we didn’t end up going and a friend told us it was for the best, the retreat was mostly for white parents of adopted or biracial children of color.

But the Jewish Multiracial Network is trying to branch out and this year, there were Jews of color of all ages present: from adults to teens to children and babies. Whoever ran programming had been careful to cater to all these populations. The hope is to draw more adult Jews of color to the retreat and adjust programming to reflect these folks.

Friday night there was a treasure hunt and if I had been a kid at heart who is not afraid of the great outdoors and the great big ticks out there, I might have participated. Instead, I cozied up to fellow blogger, MixedJewGirl and talked about how we can deal with some of the obstacles facing Jews of color in the Jewish community. We talked about connecting Jews of color to each other, figuring out which synagogues are welcoming to Jews of color (check out the JMN list on this one and let me know if you have more additions for the list). We also discussed how we can fix a major problem area Jews of color face in the Jewish community: dating. 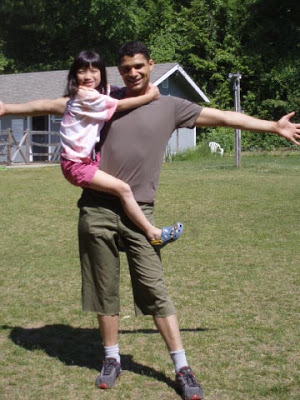 Saturday morning I got up bright and early, which is totally unlike me, because I wanted to attend some of the morning workshops. I attended one with my husband called “White Parents, Multiracial Families” with Harriet McKinney, who was wearing a name tag that proudly read “Bubbe” the whole time. We learned a lot about some of the issues white parents face raising children of color. Harriet led a fantastic workshop. She was energetic, funny and she had some great advice. I realized that when my husband and I have kids I am going to have a lot of questions for her and the parents I met at the workshop.

You know, hanging around!

After lunch, my husband and I gave our talk. First, I did my shtick/performance called “Memoirs of a Jewminicana” where I talk about how and why I converted to Judaism and what it’s like being a Jew of color in a world where people can’t imagine you can be Hispanic and American, much less Hispanic and Jewish. After my 20-minute bit, my husband and I came together to talk about what it has been like for us discussing racism in the Jewish community. Overall people were really supportive as we voiced our frustrations. And someone introduced themselves afterwards and told me that I wasn’t the only Dominican at the retreat because hea and his wife had adopted a Dominican child! I was totally blown away.

One workshop led by April Baskin and Ariel Vergosen was one of the most emotional, awesome workshops I’ve ever attended in my life. Jews of all colors came together to honestly discuss their personal experiences and their connections to the Jewish community. I learned so much about myself and how others view the Jewish world and their lives as part of it.

We decided to check out on Saturday night so we missed the Sunday morning programming. I really had a fantastic, relaxing time. I felt like I was in an alternate universe all of Shabbat, surrounded by such beautiful Jews of all shapes and colors. It was fascinating to talk to white parents who are raising little Jews of color. It was incredible to hear about the experiences of biracial Jews who had been raised in the Jewish community. I heard the word “ally” used over and over again and I met many of them, so many white Jews who are sensitive to the issues Jews of colors face and were there to support us.

Last year, I tried to convince some of my friends to attend the event with their kids. But there was a question of how this kind of event would work for observant Jews. So, here’s my take on that…. 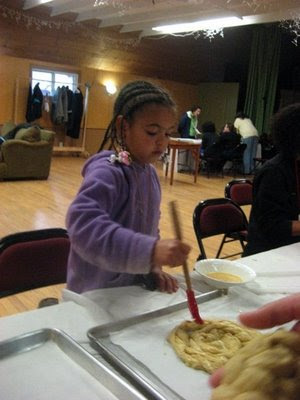 It was really odd to have Shabbat dinner really early (I think the Isabella Freedman Center, where this event was held, has specific meal times). Throughout the retreat, my husband and I davened alone together without a minyan. There were services but I don’t know that an Orthodox Jew would have felt comfortable at them. At Limmud NY and Limmud LA, there were simultaneous services of all kinds but because many of the Jews at the JMN were not observant, there was no demand for a male-led, mechitzah service.

Mostly, people were really sensitive on Shabbat about being respectful of those of us who observed it stringently. I didn’t see anyone talking on their cell phones and most activities were Shabbat-friendly. There were some that were not and I could understand how this would have made many of my friends uncomfortable. I was familiar with these issues after attending LimmudNY and LimmudLA. I truly believe that as more shomer Shabbat people attend this JMN event, accommodations will be made for them.

The Havdalah ceremony was also really, really early. Probably, this was the oddest non-Shabbat friendly experience for me. We ditched that group activity and stayed in our rooms while it took place. When Shabbat was over, we came out and the staff helped us scrounge up grape juice, candles and a nice-smelling tea bag so we could do our own Havdalah ceremony. At this point, there was already a bonfire taking place outdoors. Yes, it was a little uncomfortable but we survived and it was worth it.

Of course, I would attend the event again, despite the aspects that were not Shabbat-friendly. I cannot explain how deeply moving it was to connect with other adult Jews of color and relate our varied experiences in the Jewish community. At one workshop, I started crying because I was so overwhelmed with emotion. I think I was able to cry in front of everyone because I felt that I was in a safe, supportive space.

Even the goats at the Isabella Freedman Center were multiracial. Here is the proud white papa with his kids. The biracial mama goat (black/brown) is not pictured.

While I do expect to have to raise my children in a Jewish community where most people do not look like them, where they are constantly “Other,” just thinking about it feels incredibly daunting. But I felt like most of the parents there that it was wonderful that one time of the year, at this JMN retreat, our kids could experience a world where most Jews looked like them, where no one stared at them or interrogated them about how they were Jewish. Hopefully, one day the entire Jewish community will be able to provide this kind of positive, safe space for all Jews of color.

7 thoughts on “Reflections on the Jewish Multiracial Network retreat”