Okay, so American Girl created a Jewish doll. Her name is Rebecca Rubin and not all her outfits are tznius (modest). She’s growing up in New York City in 1914, right around when my great-grandmother was born. She’s a Russian Jewish girl who wants to “stay true to her heart as she follows her dreams in the big city.”

In “The New American Girl Doll: Whose Version of Jewish?” some valid points are explored. For instance, despite the fact that Sephardic Jews have been in America (and New York), a great deal longer, Rebecca Rubin is an Eastern European Jew through and through. Given the multicultural landscape of American Jewry, does Rebecca represent all Jews everywhere? Is that too much to put all that on one tiny little doll? Come on, she does after all come with a Sabbath set and an American flag. 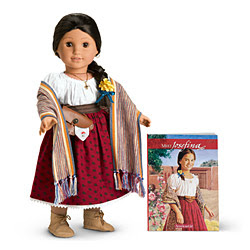 And of course, the first minute I heard there was a Jewish American Girl doll, I wondered if there was a Hispanic one. There is. Her name is Josephina Montoya and she’s a “New Mexican” girl growing up in 1824. She lives on a rancho and likes celebrating a good fiesta. “Can Josefina welcome change and still remember the old ways?” Probably not, this is America after all, the ultimate melting pot. This means some stuff’s got to melt. More likely, Josephina’s great-grandchildren will not speak Spanish or understand the world fiesta but they will marvel at their WASP-y neighbors who have a piñata at their birthday parties. 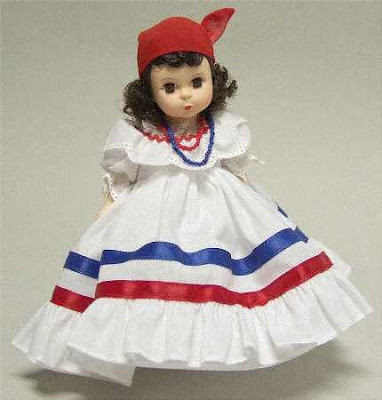 So how about a Dominican American Girl doll replete with some of the stereotypes and historical facts creating Rebecca Rubin probably entailed? I suppose we, Dominicans, haven’t been in America long enough for people to start thinking about how we fit in historically into the grand scheme of American Girl dolls. Of course, that can’t stop me from dreaming.

Altagracia’s story begins when she and her mother escape poverty in the Dominican Republic by heading for Washington Heights in the early 1970s, leaving her father and her four younger siblings behind with abuelita, Mami’s mother, to take care of them.

Altagracia and her Mami are from Santiago and when they arrive in New York, they don’t speak a word of English. Altagracia quickly picks up the language from watching television. But Mami doesn’t and so she ends up working two jobs, stitching together clothes in a garment factory downtown and working as a maid for a family on the Upper East Side who mistakenly thinks Mami is Mexican. Mami has to explain frequently that she doesn’t know how to make tortillas, quesadillas or tacos.

For breakfast, Altagracia eats mangú (mashed plantains) with eggs or salchichon (hard salami). Sometimes, she has a watery version of rice pudding, arroz con leche, which is quite delicious. For lunch, there is always rice and beans, plantains, chicken or beef and a very plain salad (lettuce, tomatoes, cucumbers). Sometimes, Mami surprises Altagracia by adding avocado salad on the side or making habichuelas con dulce for dessert.

Altagracia is surprised by how many different kinds of people speak Spanish in Washington Heights. She meets Puerto Ricans, Cubans, Peruvians, Mexicans from all over the Latin America and the Caribbean. In school, she’s always breaking up fights between her Puerto Rican and Dominican friends…she can’t bear to choose sides because her own abuelito, who is not longer with us, was half-Puerto Rican. Though at home, Mami calls her Anibalixa, in school, her white American teachers simply call her “Grace.”

While doing her homework, Altagracia listens to merengue and dreams of becoming a lawyer or a doctor and making her family proud. She has never actually met a Latina doctor or lawyer but still she dreams. She practices being able to say chocolate correctly on a daily basis: “chocolate” not “shocolate,” she scolds herself. Altagracia hopes to make enough money one day to bring her father and her younger siblings to New York. She also wants to be able to support her mother so Mami won’t have to work so hard.

Altagracia Anibalixa comes with many accessories, including a rosary (she is Catholic), an azabache pendant (see below) to protect her from the evil eye, an American flag, a Dominican flag, a tostonera for mashing plaintains, a güira and a pair of maracas.

Of course, when Altagracia Anibalixa Rodriguez decides to convert to Judaism, she will come with a Shabbat candle set, too.

An azabache pendant and a güira.