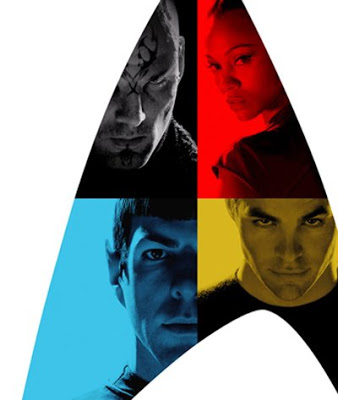 Hello, my name is Aliza and I am a Trekkie.

No, I have never been to a “Star Trek” convention (though I’ve wanted to go). No, I haven’t watched every single episode of every incarnation in the series. But I can tell a Tribble from a tricorder, though Newsweek was correct to claim that the new Star Trek film doesn’t even require that sort of knowledge from viewers.

I’m a Trekkie because I do get that sweet stirring of butterflies in my stomach when I hear the “Star Trek” theme song and as a kid, I stayed up late to watch just about every episode of “Star Trek: The Next Generation.” My mother and I were obsessed with the telenovela-like relationship between Deanna Troi and William Ryker. As an adult, I visited Star Trek: The Experience at the Hilton in Las Vegas and even dined at Quark’s Bar.

So when my husband said he didn’t want to stay out late Saturday night to see the latest “Star Trek” movie, I got a little hysterical. There was no way I was going to miss seeing Star Trek on opening day (which for me now that I keep Shabbat is Saturdays, though I do often toy with taking in a Friday night matinee).

The minute Shabbat was over; we went into overdrive, driving to downtown Manhattan at warp speed to get to the 11pm IMAX showing at West 68th Street. We got there at 10:15pm and the showing was already sold out. (Do you have any idea how many seats are in an IMAX theater?) We settled for the IMAX-less 84th Street showing at 11pm instead. I figured if the film was really good, I’d see in on IMAX next time.

I wish I had waited for the IMAX. The special effects were amazing, jaw-dropping, invigorating! From the beginning, we were on a theme park thrill ride and I never once wanted to get off. It felt like going… home and oh man, did the nostalgia set in, as we hopped aboard to the first voyage of the USS Enterprise. Everything looked sleeker and shinier than I remembered it but I was warmed by returning to such familiar surroundings.

The film is a prequel of sorts. It focuses mostly on the origin stories of Jim Kirk (Chris Pine) and Spock (Heroes’ Zachary Quinto), chronicling their stories from childhood in parallel vignettes until adulthood when the two finally meet and butt heads at Starfleet.

In the film, Kirk’s a little self-destructive, a product of being raised without the father who is killed in the opening credits by the film’s big bad, Nero (Eric Bana). And Spock is “a child of two worlds,” never truly comfortable on Vulcan, his father’s home, or on Earth, his mother’s. They’re wrapped up in their own problems until the maiden voyage of the U.S.S. Enterprise, which Kirk sneaks onto, makes them each other’s problem.

The film is as much about these two epic characters as it is about the supporting characters who round out the crew. Dr. Leonard McCoy (Karl Urban), who becomes Kirk’s pal early on, is a nervous fellow who says his wife “divorced me and took the whole planet.” Montgomery Scott (Simon Pegg) is a Scottish brute genius. Hikaru Sulu (John Cho) seems like a fragile flower until he whips out a can of whoop-ass on some adversaries he’s battling back-to-back with Kirk.

Pavel Chekov (Anton Yelchin) earns many laughs by talking himself tongue-tied with an impossibly funny Russian accent. Oh and Uhura is a sexy, sultry drink of water who won’t let that get in the way of all these men taking her seriously. It’s just a perk that Uhura is played by pura Dominicana Zoe Saldana. But why, oh why, did Winona Ryder steal the role of Spock’s mom from the little old ladies with real wrinkles that could have taken on the role?

I must have seen the original “Star Trek” episodes, though I remember little of them. And the film banks on sneaking in all those little unforgettable lines that true Trekkies love. I don’t remember hearing “Beam me up, Scotty,” but there were plenty of other juicy lines. That all these classic quips dovetailed so neatly with the film’s dialogue, inducing plenty of laughter from the audience with not a cringe in sight, proves that someone invested as much in the dialogue as in the special effects. This should not go unappreciated after considering the schlock that rolled onto the screen before the opening credits of “Star Trek”: the awful and LOUD, bombs-bursting-in-air clips from mega-blockbusters like G.I. Joe and the next Transformers.

Did I mention that “Star Trek” is fun? Just so fun! Not only was my heart rate was rising from all the action packed in, I was on an emotional rollercoaster from the special moments of character development that cast Jim, Spock and the crew in a new light. “Star Trek” serves as a reminder that Hollywood isn’t just mining the old stuff because it’s lazy. Thanks to this fresh focus on “Star Trek,” new generations who come fresh will be anticipating the next film incarnation just as eagerly as old diehard fans will.

And the focus is really fresh. There is even a time warp subplot that will explain away continuity issues and perhaps, let fans once again boldly go where no man has gone before. But lest we forget where it all started, there is an awesome cameo appearance from one original (Jewish) cast member that will leave audiences cheering.

5 thoughts on “Getting Trekked Out”