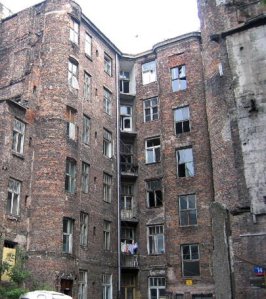 I’m not very good at guarding my tongue which is probably why that part of the Shemoneh Esrei, the prayer Jews say three times a day, that focuses on this common human defect is my favorite. But I’m working on it. I’m particularly watching the vocabulary I use and how that might be offensive to others. This week, I decided to forgo using the term “white trash” in pleasant company even when the people in the room weren’t white trash themselves. I know, huh? Anyway!

But I was shocked when one of my Twitter followers, RuthieAA (aka Ruth Abrams who blogs at Interfaithfamily.com) was upset I used the word “ghetto” in a Tweet. (By the way, that’s what those of us on Twitter call our 140-character posts.) My Tweet? “Someone asked my sister if she was ghetto. She’s not, we decided, unless you mean ghetto enough to punch your teeth in.” My sister was obviously offended by being called ghetto. Though half her childhood was spent in a “ghetto” (Washington Heights), she was decidedly NOT ghetto.

Growing up “ghetto” was reserved for those kids who hung out at all hours of the night doing G-d knows what on street corners, unable or refusing to speak proper English. We called them tigueritos. Thugs. But when RuthieAA asked me what I meant by “ghetto,” I decided that in the case of my infamous Tweet, it had meant “violent, inappropriate, hot (sometimes hot-tempered, sometimes too cool for school), and (just a little) crazy.” Was I speaking some foreign language? Had I misused slang? Was I, my mother would roll over in her grave if she knew this and many other things, even using slang?

During some serious Twittering (communicating with others on Twitter), we played around with rough definitions of “ghetto.” A food and a person could be “so ghetto” and even “ghetto fabulous” but was it being used pejoratively and was it okay when it wasn’t? RuthieAA seemed to think the word “ghetto” wasn’t racist but she wasn’t altogether sure using the word was kosher. RuthieAA said it seemed like a shibboleth to her. A what? According to Wikipedia, shibboleth usually refers to features of language, and particularly to a word whose pronunciation identifies its speaker as being a member or not a member of a particular group. So, the word “ghetto” was divisive….

I finally asked my friend from back in I.S. 143, the junior high school that skirts Yeshiva University in Washington Heights, what she thought the word ghetto meant. She thought using the dictionary definition of ghetto (which we haven’t yet notably) was “wack” (stupid, no good). She said “I define “ghetto” as a state of mind that transcends race/ethnicity/culture even class. the ghetto state of mind is one of defeat. from Washington Heights to a trailer park in Iowa, a “ghetto person” is one who thinks they’re owed something because of whatever life circumstances they’ve had. they’re someone who is resigned to being where they are with no ability to look ahead.” Then she had to run because her boss was looming over her shoulder. In my friend’s definition, calling anything ghetto definitely was a pejorative.

Even after RuthieAA said that she had heard ghetto used as a compliment: “cleverly making due with too little,” I couldn’t quite look at the word the same way again. Sure, my suburban friends laugh hysterically when I use it but would my junior high school friends if they were in the room? Would Holocaust survivors think it was funny? Some of them had after all been forcibly put in ghettos and some people now argue institutional racism has forced many minorities back into American versions of it.

“What does ghetto mean?” people asked on Yahoo and the Best Answer was that ghetto is now used “to describe someone or something that displays characteristics of a city. Specifically the rap music subculture typically referred to as ‘gangsta.’ Ghetto clothing is often baggy and worn by ethnic minorities within cities, or by mainstream American teenagers from suburbia that want to rebel against their parents or authority. In America, you can be “ghetto” even if you’re white and weren’t born into one. This all pretty much sums up what Urban Dictionary has to say about the word.

So in the end, I discovered “ghetto” is not a nice word. And maybe I’ll still use it. Maybe I won’t. But the world won’t roll so easily off my tongue. It won’t feel comfortable. My junior high friend says “being a street thug is a symptom of being ghetto. the street thug doesn’t realize that if s/he punches someone in the face they can go to jail, they can’t see past their anger to the repercussions. this ‘ghetto’ thing is a sensitive topic for me. I feel like it’s used negatively to describe certain living conditions, however people have risen out of such situations (you and I included).” I suppose that RuthiaAA is right, “it’s hard to be welcoming when activating hidden tripwires.”