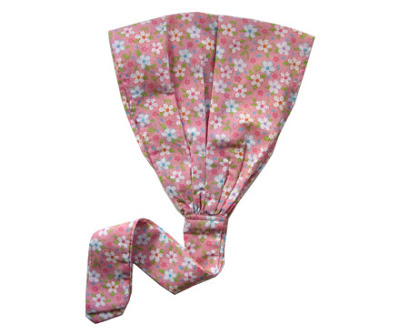 (Ah, the little headband/hair scarf. Works sort of like a thong but for my head.)
“You’re a hypocrite,” he said but he didn’t use those words exactly. He tried to be polite about it even though it was obvious from his tone that every single hair on my head had offended his sensibilities. How could I trumpet my love for Orthodox Judaism with every breath, he wanted to know, but then walk around the world with my head uncovered?

(I like these except for the fact that if you’re Hispanic and wearing the wrong color, you could get shot at in the ghetto.)

I just stood there stunned, mouth half opened, defenses down. I had just finished what I thought was a good speech on the story of my conversion and I hadn’t expected to be attacked, not in this way. And I wondered: Didn’t he see the brown and white poka dot headband/bandana I had carefully picked out this morning or had my head covering totally been swallowed up by my curly afro? It wouldn’t have been the first time this had happened.

Before I converted, I practiced covering my hair. I was studying at a school in Israel and I battled the Jerusalem heat by whisking my afro away into a head scarf. It didn’t even matter too much that because my hair was so big (never long) I looked like a cross between Marge Simpson or the alien from the Sigourney Weaver movies with its equally bulbous head.

(Yea, that’s pretty much what I look like, eh?)

And when I finally got married, I went into frenzied shopping for head coverings. I noticed the ones I liked on my married friends and other congregants at shul and I bought them by the dozen. But when the head coverings arrived, they didn’t fit. In a beret, it looked like a mushroom was growing out of my head. The head scarves wouldn’t cover my mass of curly locks. And worst, no matter what I used to cover my head, my hair became brittle, broken and misshapen. I was embarrassed to uncover my hair in front of my husband.

So I shaved it.

I made a joke about it to my husband beforehand and then I went and actually did it. I went to a Dominican hair salon much like the ones my mother had taken me to every week to straighten every curl on my head ever since the moment around my third birthday when she noticed aghast that I had “bad hair.” I’ll never forget those hair stylists from my childhood who protested that my hair was too wild to tame and overcharged my mother every visit. They made cutting comments about my “bad hair” as they blew it straight with hair dryers that burned my ears.

So after about a month of being married, I got a buzz cut. The woman at the hair salon protested. She said my hair was too gorgeous to cut off. I didn’t even pause to let it sink in. This was the first and only Dominican woman who had every complimented my hair. My great-grandmother, my grandmother, my mother had all nearly died of heart attacks when I rebelled against their racist regime by refusing to straighten my hair at age 16. I spent the years after fighting off their disgusted glares and comments that whittled away at my self-esteem.

(Oh, the sadness when I realized I couldn’t contort my hair into this hair scarf pretzel.)

My husband nearly passed out when he saw my nearly bald head. He didn’t think it was attractive. He missed every blessed curly lock. His friends tried to console him while my hair grew back. And when it finally did, he made me promise never to shave it again.

A year passed by, a year of bad hair days and ill-fitting hair coverings, before I finally returned to a hair stylist, a curly hair specialist who cooed over my natural, never been dyed, never been straightened, mane. But in the midst of cutting it, she noticed that the hair on the top of my head was thinning. She said she’d seen it before in other Sephardic clients who covered their hair. She explained my hair was too thin, too fine, and too fragile to be covered constantly. I was dazed. Now, my hair wasn’t just ugly from covering it, I was losing it too?

But I wouldn’t stop covering my hair. No, never that. So I took to wearing headbands and bandanas that let my hair breathe.

I tried to ignore the comments my friends murmured from under their sheitels at weddings where they wondered aloud if “that was how I was covering my hair now” and “why don’t you just straighten it or cut it?”

(Ah, the Rasta beret. Fits like a glove. Looks like a mushroom cloud on my head. Comes in many fascinating colors. )

Incidentally, I had worn a sheitel once and discovered that much like many hats even the roomiest sheitels could not fit over my massive hair. Incidentally, I had discovered that when I covered my whole head people assumed I was born Jewish, Sephardic even, and they were more likely to make racist comments in front of me because they were sure there was no one in the room (surely not an undercover Hispanic girl) to offend. And when I showed just a little bit of hair, I watched as people stared pointedly at my hair before they asked me if I had converted to Judaism.

So, yes, in case you missed it, I am miserable.

How have I managed to go from family members putting me down for what naturally grows on my head to being put down by Jewish women (and men) who think my head coverings are insufficient? Why was I explaining that my head coverings often cause fibromyalgia flare-ups that lead to mind-blowing pain across the nerves on my scalp? Why was I even bothering to explain myself to anyone? Why did I need their acceptance?

But I don’t want to be miserable so I think it’s about time I got some cojones and spoke up.

17 thoughts on “The Many Stages of Getting Pissed”