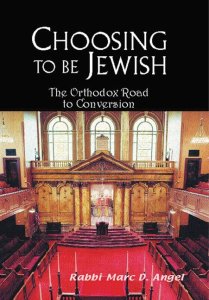 I’ve recently discovered Google Alerts which thankfully, tracks down all the articles on Jewish conversion and beams them into my inbox. I just sit and wait. It seems that most news on conversion has to do with that age old heavy question, “Who is a Jew?”
In the latest article, Jewish Agency adopts conversion resolutions, it seems like independent authorities are trying to force the Israeli government to come to terms with and remedy all the factionalization around the issue of “who is a Jew?” across the different streams of Judaism. I don’t even know what the Jewish Agency Assembly is, much less understand what they’re trying to do. Plus, I’m also a cynic. I think it’s too much to expect the Israeli government to “establish immediately an independent conversion authority to resolve and deal with the conversion issue.” The conversion issue has been going on for years, decades and there seems to be no end in sight. It just keeps getting muddier, folks.
As long as there are different streams of Judaism, there will be questions about which stream of Judaism gets to decide who is Jewish and who isn’t. As long as The Law of Return gives Jews and those of Jewish descent the right to emigrate to Israel, there will be non-Jews in Israel. It doesn’t seem possible or feasible to insist that everyone with Jewish ancestry convert or that every stream accept those conversions and those people as Jewish. With the move for secular conversions in a recent article, it seems like there will now be people who are civilly Jewish and halakhically Jewish. According to the Orthodox isn’t this already the case anyway.
I think things are more complicated in Israel because, well, it is Israel. There’s an emotional connection there. And there has been movement to try to make Israel the center of the Jewish world when, in fact, America and other places in Europe have been hubs for a different kind of Jewish life for much longer.

Oh, right, and there is that little thing about religious marriage in Israel. What do we do with all those non-Jews who aren’t converting? Is there such a thing as civil marriage in Israel? Should there be? Doesn’t anyone else have a headache? I just gave myself one!