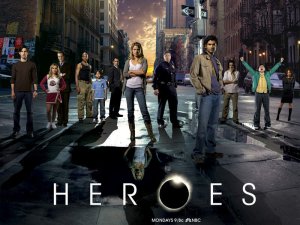 Yes I am so frum that I don’t even have television. Just kidding. I don’t have cable but I definitely have a flatscreen HDTV. (Thank you, Bubbe!) Growing up I read Entertainment Weekly religiously and I was the kind of girl who dreamed of having her own personal theater. Though, we only saw movies on channel WPIX11 and when our aunt took us to a new children’s flick every now and then, but I knew all about movies. I created a entertainment magazine for my friends in junior high school. If you needed to know Tom Cruise’s birthday or when the latest Brad Pitt flick was coming out, I was the person to ask.

So how come I don’t have cable?

My husband thinks TV rots your brain. He grew up watching it as a treat, not every day like me. Our middle ground is that I’m allowed to ordered shows on DVD from Netflix and watch them online. But the scary thing is…I almost never do. Okay, right now I own a couple of golden oldies on DVD, Buffy the Vampire Slayer, Alias, Gilmore Girls, Lois and Clark: The New Adventures of Superman and even The Nanny. If I had my way, my collection would grow exponentially. I’ve been watching Smallville on DVD as of late but the thing is, without cable, it’s hard to keep up with new shows. I never really care anymore about a premiere for this or that, I’m way more willing to wait to watch the whole series on DVD.

I have become one of those people that advertisers hate. The only commercials I ever watch are 30-second slots that pop up while I’m watching a show online. And the only show I have watched religiously online is Heroes. I even downloaded all of Season One off Itunes. The juicy neverending battles between good and evil that play out in super Heroes is decidedly my cup of tea. But I know nothing of Gossip Girl, the new 90210, Grey’s Anatomy and all these other television shows that are referenced in my Newsweek and Time subscriptions. Oh, and my Entertainment Weekly subscription.

So when the locksmith was banging out a new set of keys for me after I bent the old ones by slamming the door ON them and he made a reference to the latest Heroes episode, I smiled. I couldn’t believe that I had not fallen completely off the pop culture planet. But then I watched an episode and a half of Gossip Girl and a couple of Grey’s and I realized that I am one of those people advertisers REALLY hate. The kind that realizes that there’s much more interesting stuff to READ and RENT and DO than watching the latest episode of Gossip Girl and Grey’s Anatomy. Sorry to fans of either.

P.S. But I must admit, the latest Heroes episodes totally ROCKED!