The hardest part about keeping kosher hasn’t been having separate dishes and utensils and pots for everything. It hasn’t been giving up tasty treats like eel and octopus either. Yum.

The worst part of keeping kosher is the utter lack of Dominican restaurants. Or for that matter, any kosher Hispanic restaurants. Sure, I dabbled in some rice and beans in Israel at an Argentinean restaurant but it just wasn’t the same.

I had high hopes for Los Angeles. Maybe a Mexican restaurant…and I’m stretching there considering that there’s not too much in common between Mexican and Dominican cuisine. I still keep my hopes up for kosher Puerto Rican food in Puerto Rico and maybe there’s kosher Cuban food in Miami. Ah perchance to dream!

Here are my top choices for foods I’d like to be served in my, so far only theoretical, Dominican restaurant: 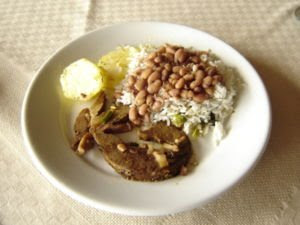 Okay, I can make them myself. I eat them, like, EVERYDAY. I even brew a mean recaito. But I can’t synthesize the same taste I’ve licked my lips over when chowing down at a real Dominican restaurant. And did I mention that now I’ve gone “healthy” and substitute yellow/white rice for brown and wild rice. My ancestors are rolling in their graves, no?

Crunchy, salty pastries (or “turnovers) filled with beef, raisins, green olives or thick with white Spanish cheese. My husband has attempted to help me relive this delicacy by wrapping beef, peppers and olives in a wrap. But you still don’t get the same texture. I miss crunching through an empanada and the crispiness of pastelitos flaking off in my mouth.

Abuelitas on the street corners of Washington Heights taunt me with this sweet concoction. It’s the only kind of beans that I’ll eat without rice. I don’t even know how to describe this. It’s a sweet soup. Or is it a drink? My mother used to take hours to make it at home. Now, I salivate over it when I see it sold on the streets. I even stopped a Dominican woman and made her give me the recipe for it. To do this, I had to explain kashrut (kosher laws) to her in Spanish. Considering how rusty my Spanish can get, I’m surprised she even understood me at all.

Survival of the Fittest…

I also miss paella, which I had the misfortune of ordering at a kosher French restaurant. That’s probably like ordering pasta at a deli. Bad move. But I have managed to develop quite the appetite for kosher paella, no shellfish but chicken and sausages will do trick. I’ve also discovered that the kipe I used to eat are Lebanese kibbeh. I almost overdosed on them when I uncovered them at an Israeli food stand in Jerusalem. Now I get them frozen at the local glatt shop.

The point of all this…I love me some Spanish food and someone needs to open a kosher Dominican restaurant in Washington Heights. Please. Get some Dominicana behind a kosher set-up and let her rip! The great thing about Spanish food, as my husband will tell you, is that you can enjoy it without even needing to speak Spanish. He’s trying really hard to stop calling recaito, the green goo.

Speaking of the recaito, it made its debut at the HIR Friday night meal at Sarah and Abraham’s tent. The host of this free meal at the synagogue asked me to bring it in fresh. I told him that it’s for beans but he insisted that it could be used as “Dominican pesto.” And he was right. I saw many of the 60 or so guests spreading it on challah, flavoring their chicken with it and adding it to their salad. Cultural fusion, eh?

Do you have a favorite Hispanic food?! Send me an email about it and join the Hispanic Heritage book giveaway. You know, to get you some culture!