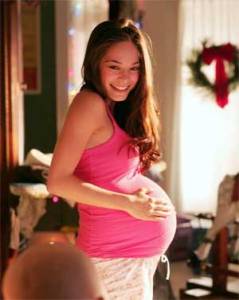 Everyone I know is pregnant or trying to get pregnant. Well, everyone except me. The other day I felt like a hostage as I sat around with moms discussing daycare options over lunch. During my regular Target shopping spree, I became harried going through racks of baby clothes as I searched for a gift for a friend’s baby. What in the world does 6M mean? And does NB really fit any baby? Don’t get me wrong, I’m not unhappy for all my glowing, new and improved friends. And no, I’m not terribly jealous either. I just can’t help feeling like an outsider in my peer group as I master the art of having casual conversation while my girlfriends feed their newborns.

I’ve never really wanted to be a mother. Though I have baby names for all of the imaginary children my husband and I have together, I am terrified of sweet-smelling creatures who crawl on all fours. I cringe at the idea of sharing my room, my breasts, my life with a wailing infant. At 27, you’d think that I have had enough therapy to process why the eldest of eleven is concerned about becoming responsible for yet another human being.

I stopped loving my mother when I was eight. If this seems drastic then you should know my mother probably stopped loving me soon after I was born. I was the primary reason my father married my mother and I was, my mother had hoped, the reason he would stay. But when he finally left after countless infidelities, my mother never failed to remind me that she was “stuck” with me, that I had “ruined” her life and that she could never forgive that my father had loved me more than her. I have a sneaking suspicion that the way my friends hold their sons and daughters now, with tired looks of exquisite serenity, looks nothing like how my mother held me.

I’ve been a parenting since age three, when my first sister was born. B. was a born wild child and there was no way setting a good example was going to reform her. But hell, I tried. By seven, I was changing diapers while entertaining my sister, A., soon after she was born. At fifteen, I came home from school to give my baby sister, K., her bath and then woke up in the middle of the night to rock her to sleep whenever my mother locked Kary out of the bedroom they shared.

But I didn’t become a parent legally until A. ran away from home at fourteen. She was following the example I set for everyone after leaving at seventeen. When family court threatened to send A. back home and A. threatened to kill herself, I stepped in to fight a three-year custody battle against my mother. I was 21. Overnight, I developed the fear all parents have when their child isn’t right in front of them to protect. I worried daily about caring for two on a budget for one. I shook my fist in anger as I charged an overpriced graphing calculator her teacher requested at the last minute to my trust fund, my Discover card.

My sister B. turned an intervention for her on its head when she got everyone to agree that I had to stop meddling in her life. My therapist told me I needed to realize that my sisters are finally adults and I start caring for me. But though I don’t carry a photo of A. in my wallet, I never resist telling anyone who will listen that her college GPA is a 4.0 despite holding down two jobs. If my sisters are any example of my skills of as a parent, then I “did good.” I should be a shoo-in for Mother of the Year, right?

But I don’t know what a mother is. I learned to mother my sisters by reversing everything I ever saw my mother do. Don’t hit your kids in the head with rollerblades. Don’t force them to lie or cheat or steal. Don’t beat them with telephone wires after Thanksgiving dinner. Don’t laugh at them when they tell you they miss you. Don’t tell them you’ll kill their younger siblings if they disobey. Whatever you do, just don’t hate them.

I worry that even with all my experience as a child, then teenage and later, barely adult parent, I will not be able to do the awesome job of mother any justice. I’m terrified of the violent temper I inherited from my mother. And when I lose it, I imagine doing it in front of my imaginary kids. Whenever I roll my eyes as my friends nuzzle and coddle their children, I know that it’s because my mother never did that for me. And then I realize that being a mother is about more than just knowing what not to do.

My mother-in-law, E., used to call me every day until I made her stop. All the attention was completely freaking me out. I didn’t understand why she wanted to talk to me so much. Why did she insist I stop to say hello every single time I walk into her house after running an errand? I mean, didn’t I say hello to her in the morning? Doesn’t that mean I’m covered for the entire day? And what’s with all the hugging? In the year I’ve been married to her son, E. has done more for me and my self-esteem than my mother did in seventeen years. But E. swears her approach to parenting is not to parent at all. I know she lies.

E. picks off what her daughter N. won’t eat before handing the precocious five-year-old her lunch. When N. complains anyway, E. responds firmly without having to resort to beating N. to a bloody pulp. E. is consistent but not smothering in the way she shows affection to her three adult children. When she goes to Target, she buys clothing for all her brood and then mails the gifts halfway across the country to New York. She worries about spoiling them. And then she sighs happily as she tells me that I’m her favorite daughter when I call to ask her about her sunnier days in California.

When I look to my mother, I know not what to do but when I look at E. and all the new mothers around me, I’m not sure what to do at all. What if I can’t breastfeed because of antidepressants coursing through my veins? And if I pat my imaginary son in the tushie for being disrespectful, is it because of my history of child abuse? And if I don’t learn to hug and coo properly, will my imaginary daughter think mommy doesn’t love her? Really, instead of a college fund, should I be creating a health fund to help my children defer the costs of future therapy bills?

I came to my husband in tears after reading Leslie Bennetts’s The Feminine Mistake: Are We Giving Up Too Much? and Pamela Stone’s Opting Out: Why Women Really Quit Their Careers and Head Home. “I don’t know if I want to be a stay-at-home mom! I don’t know what to do!” I gasped through tears. Calmly, my husband reminded me that our imaginary children didn’t really need a stay-at-home mom and that our future children hadn’t even been conceived. In response, I sniffled.

Someone else told me not to talk about my mother’s abuse so much because it made people start thinking about whether or not I planned to take the cycle of abuse into the next generation. But if I didn’t talk about it, I would still think it. Someone told me that by simply worrying about turning into my mother, it means that I won’t ever become the kind of mother that my mother was. But what does that mean? There doesn’t seem to be a person or a book to answer the question that really worries me when I see protruding bellies, breast pumps and onesies. How do I know what kind of mother I will be?

One thought on “Mothers/Submission for "Personal Essay Clinic: Writing about About Family" Class”