So, it’s been a while but I wanted to post this video I made. I was asked to do it by another Dominican on Facebook who told me that many young Dominicans are posting videos discussing their Ancestry.com results to raise awareness about our mixed heritage.

While I was born in New York City, as were my three maternal sisters and some of my paternal siblings, my parents from different parts of Santiago in the Dominican Republic, including el Cibao and Gurabo. Areas there like Franco Bidó and La Cumbre de Juan Veras were named after my ancestors. I am a direct descendant of the Diaz-Veras and Paez-Franco-Bidó-Deschamps families.

My paternal grandfather Simon was so white, he was called “Blanco.”

Every single person in my family would be considered a different race based on phenotype in the US. I consider myself a mixed race Jewish Dominicana.

My mother is a descendant of the Franco-Bidó family who themselves were descended from a Spanish count and were part of the political landscape in the Dominican Republic:

There are two Dominican vice presidents in my family tree:

Domingo Daniel Pichardo Pró, the father-in-law of my 5th great-uncle, who was vice president from 1857-1858

And  Eugenio Deschamps Peña, my 4th great-uncle, who distinguished himself as a speaker and journalist and was exiled after publishing a controversial piece on freedom criticizing the current dictator Ulises Heureaux Leibert in one of the many newspapers he had founded. He was also highly critical of the United States occupation of the Dominican Republic. He is remembered as one of the greatest orators of Dominican political history.

And the equally if not more famous, two famous generals:

And Juan Luis Franco Bidó, my 6th-great-uncle, who was a Brigadier general who commanded the cavalry in the Dominican War of Independence

I can trace my maternal ancestry in the Dominican Republic to my 6th-great-grandfather Captain Agustin Franco De Medina Guerrero who was born in Santo Domingo in 1768.  He was taken prisoner and exiled by the Spanish and sentenced to death under the accusation he was a French spy by Haitian king Henri Christophe. The charges were dropped when he proved to be a Dominican native.

The most recent ancestor I have been able to trace back on my family tree was my 9th great-grandfather Agustin Franco de Medina was born in 1675. I can trace his lineage to my 13th grandfather.

As a poor kid growing up on welfare with my single mom and two sisters in Washington Heights, I certainly never imagined that my ancestry was so colorful and included such noteworthy ancestors.

Correction: I meant to say that I am 100% Dominican, I have never thought or considered myself 100% European! I consider myself a person of color because I am mixed race despite my fair skin. I am very proud of my ancestors and my ethnic heritage.

Just click on the photos below to zoom in.

Results from my two full sisters: 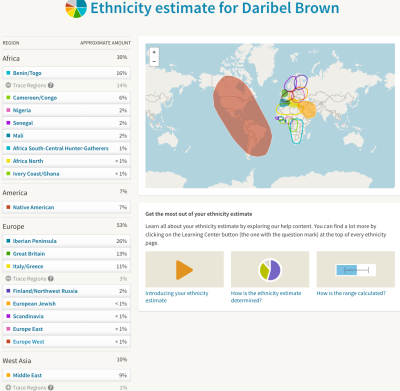 Results from my father’s brother. Neither of my parents wanted to take the test though I bought tests for them. My uncle was really proud and surprised that he had Jewish ancestry.