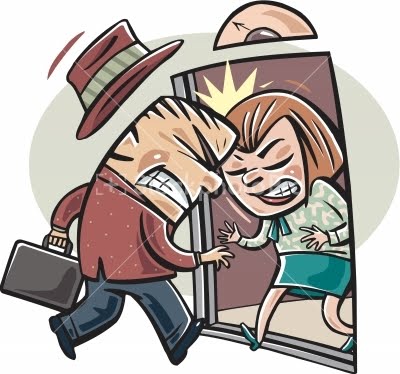 My pain is acting up from too much typing so I have to make this briefer than I’d like but longer than I should. 🙂 Yesterday, as everyday, I had to push myself to go to the gym and run errands but I was terribly exhausted after having overdone it the day before at the gym and running errands. I knew when I woke up, I’d never make it to the gym so I already felt like a failure for the day. But finally, late in the afternoon and into the early evening already, I got myself going with my granny cart to schlepp my library books over to the library to take them all back out again because I couldn’t renew them online. There was a time, just very recently, when this short walk to the library was like climbing a mountain for me.

As I pushed my granny cart up to the library, a modestly dressed African-American woman with lovely long braids gawked at me. I figured she was staring because I had a granny cart. LA isn’t like NY; when people go grocery shopping here in LA even if it’s a short distance away, they take their cars. Of course, I still can’t drive because of the barrage of chronic conditions I have now accumulated and the medications that bar me from “operating heavy machinery” even if I could drive for longer than 20 minutes without experiencing seemingly endless excruciating spikes in my pain levels.

I tried not to stare back at the woman as I worried she was going to ask me for change or, given the way she was dressed and my experience in New York, that she was a Jehovah’s Witness. It was only as she drew closer and I grew more concerned that I finally noticed the gold Star of David pendant around her neck and felt my shoulders sag with relief. Perhaps, she was someone who knew of me or knew me from shul but who I had forgotten, I thought. That seemed rather unlikely though since Jews of color, even at welcoming shuls, stand out as pretty unforgettable features in an otherwise homogeneous landscape.

“Is your name Aliza?”

Now I was a bit back to being creeped out as she asked this. I nodded hesitantly and reluctantly once she explained that she knew of me from my blog. I felt embarrassed in my outfit, a ratty old blue Nike long-sleeved shirt and a too tight skirt I wore over shorts that only barely covered my knees but which I had worn for the comfort of the bike ride I had planned after my walk. I knew that while I planned to go bike riding, it was mostly a theoretical plan I didn’t plan to go through with since I was still traumatized from the last 30 minute bike ride that made me feel like my knees were on fire for hours of tears, ice, rest and Tiger Balm before my knees almost normal again. Or, at least, what normal is now for me which is never painless.

On my walk to the library, I had been thinking about my purpose in life or lack of purpose. I had had a lovely dream the night before where I was back in the classroom with my precious high school students and when I awoke I was happy until I remembered that all that was in the now distant past. Five years now since I have been in the classroom. And my mission since then “to get as healthy as possible” couldn’t begin to make up for that loss. Not even the writing I’d done since, cobbling together 400 pages of an unfinished and indefinitely postponed memoir or a multitude of articles and blogs and wonderful fan letters, made up for knowing that I had lost not just my health but all that had come with it…including my brilliant teaching career and the certainty of a certain kind of future.

But this woman had something to say to shock me out of my self-pity and my sulking because all the writing I had done only because I had become chronically ill had definitely affected her. She said it more than once and each time, I felt more bashful. It went something like this: “Thank you, thank you so much. Your writing, your story, made such an impact on me. You were the thing that finally pushed me over, that finally made me decide to convert.”

Eventually she told me something of her story, something about herself and her family and her journey and even played some Jewish geography with me but still, the scales were unbalanced. Whatever she’d read about my story probably meant she knew more about my story than I would ever know about hers and somehow that had been a catalyst for one of the biggest changes she would ever undertake in her life. A change, she said, that despite all obstacles had brought her peace. A peace I didn’t have.

“Are you well?” she asked slowly. She asked it more than once but I think it was only the second time that I realized that she really wanted an answer. When you are chronically ill, people ask “How you are doing?” and they mean how is your illness doing but they still don’t want much more than a short, curt answer “Okay” or “Better” or anything positive to make them think everything’s “fine” despite all the pain, all that’s changed. “No, I’m not well,” and I briefly explained the last few blogs I’d posted since she hadn’t read my blog in a while. I explained what a difficult, sharp decline I’d experienced in the past year after the dentist had botched the extraction of my wisdom teeth, ruined my digestive system and years of hard-won physical and emotional progress.

But as I told her about all this, I felt like retracting my statement because just then talking to her, I did feel well. I noted that I could stand still to hear her talk without wincing from pain in my hips, knees or ankles. “This kinda stuff never happens to me,” she said of running into me randomly in the street. “I thought you still lived in New York!” I laughed and replied: “This kinda stuff happens to me all the time” and recalled the various moments where I’d run into people at the oddest moments in my life, like running into my long-lost gay ex-boyfriend the day I finally decided to kidnap one of my sisters the first time.

This kinda stuff happens to me all the time. I’m not sure why. It makes my life feel more like a novel or a television show than an aimless, painful journey. My sisters say that the state of my health is a wake-up call I have long needed. They feel like I’ve devoted so much of my life to others: to them, to my students, to my readers, to everyone…but me. My sister insists that this time, this painful and difficult time is time that G-d has given me to focus on myself after too many years of ignoring myself much to the detriment of my health.

On a good day that gives me some short-lived purpose. And perhaps because it is so short-lived, this kind of stuff happens to me all the time. I run into people who remind me that the last few years have not been as purposeless as I have imagined and have not left me as useless as I feel because daily, it feels like my body has betrayed my mind and spirit.

Maybe this stuff happens to me all the time so I won’t forget that even in this state, I have continued to help people and that’s all I’ve ever wanted to do with my life.


NOTE: As I reiterate numerous times whether I post about my health, please subvert any desire to respond to this post with a suggestion of “things I should try” for my health. I will ignore and delete any such comments whether they are posted here or emailed to me directly. If you are confused as to why, click on the “chronic pain/fibromyalgia” tag and read ALL of the previous posts.