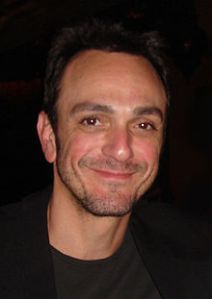 Actor Hank Azaria was born to Ladino-speaking Sephardic Jews parents. Wonder if his Ladino is as bad as my Spanish?
Earlier this Winter/Spring, I almost signed up for a Ladino class at the JCC Manhattan (groovy new site!). My sister, though, stepped in and said that I did not have THAT kind of money to be spending on taking classes in a language that none of my friends even speaks. And she added that I supposed to be spending time on my PHYSICAL health.
Instead, I decided to make a concerted effort (still hasn’t happened) to meet with the Spanish-speaking Jewish club at the Conservative Adath Israel Synagogue of Riverdale. I did, however, kidnap a bunch of the members and bring them down to the Orthodox synagogue I attend. My brain almost misfired from switching from Spanish (to speak to my Hispanic Jewish friends) to English (to speak to my Russian, Italian, Polish Jewish friends).

Apparently, if I was in California, I would not be so lonely and pining away for Ladino. In “Habla Ladino? Sephardim meet to preserve language” (J Weekly), a bunch of Jews get together to keep Ladino alive and kicking.

5 thoughts on “Lonely in Ladino”