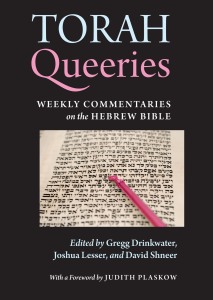 Event: Queer Torah with Rabbi Steven Greenberg in celebration of the Israel release of “Torah Queeries: Weekly Commentaries on the Hebrew Bible.”

Date: Tuesday, February 9, 2010
Time: 7:30pm
Place: Jerusalem Open House, Hasoreg 2, Jerusalem, Israel
Join the Jerusalem Open House for an evening of Queer Torah with Rabbi Steven Greenberg
in celebration of the Israel release of “Torah Queeries: Weekly Commentaries on the Hebrew Bible.” (I heard Rabbi Steven Greenberg speak at the first annual Limmud LA and it was an incredible experience.)

Rabbi Steven Greenberg, a contributor to Torah Queeries, will be teaching Torah and discussing the book. A question and answer session will follow. Event is in Hebrew, questions may be asked in English and Hebrew.

Copies of Torah Queeries will be for sale.

Torah Queeries brings together some of the world’s leading rabbis, scholars, and writers to interpret the Torah through a “bent lens”. It is an incredibly rich collection that unites the voices of lesbian, gay, bisexual, transgender, and straight-allied writers, including some of the most central figures in contemporary American Judaism. All bring to the table unique methods of reading and interpreting that allow the Torah to speak to modern concerns of sexuality, identity, gender, and LGBT life. Torah Queeries (NYU Press, 2009) is a project of Jewish Mosaic, edited by Gregg Drinkwater, Joshua Lesser and David Shneer, with a foreword by Judith Plaskow.

Steven Greenberg is an Orthodox rabbi, ordained at Rabbi Isaac Elchanan Theological Seminary. Since 1985 he has served as a senior educator for CLAL, a think tank, leadership training institute, and resource center. Rabbi Greenberg is the author of Wrestling with God and Men: Homosexuality in the Jewish Tradition, which won the 2005 Koret Jewish Book Award. He is currently rabbi-in-residence at Hazon, a leading Jewish environmental organization, and Keshet, a grassroots organization dedicated to LGBT inclusion in the Jewish community. Rabbi Greenberg contributed several chapters to Torah Queeries.

“The diverse group of scholars and rabbis who have contributed to Torah Queeries ask us to bring the whole of our selves — our imaginations, bodies, and senses — to Torah. They collectively demonstrate that every parashah (Torah portion) can speak to us as embodied, conflicted, desiring selves and as cognitive individuals.” -Mara Benjamin, Sh’ma

“With Torah Queeries, no longer is the LGBT community an outsider in the Bible. In each parasha, in every holiday, gender bending exists. …It should appeal to those who wish to read the Torah with an open mind and the willingness to look at the words from 3,000 years ago with new, and often jarring, perspective. …This is a volume that I would describe as a must for the Jewish bookshelf.” -Rabbi Andrew Sacks, Jerusalem Post

A labor of intellectual rigor, social justice, and personal passions, Torah Queeries is an exciting and important contribution to the project of democratizing Jewish communities, and an essential guide to understanding the intersection of queerness and Jewishness.

“Wrestling with G-d: Homosexuality in the Jewish Tradition” by Rabbi Steven Greenberg (Book)