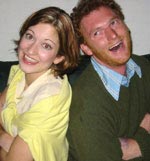 Ah, satire when done right can be utterly unpleasant and terribly funny. At least, that’s how it seems the site Black People Love Us, the tales of “a fictional white couple and their failed attempts to relate to black people,” have been taken by viewers. People can’t decide whether to laugh or cry when reading the testimonials from the white couple’s black friends.

Sadly, I could relate to many of the testimonials.

Exhibit A: People really have asked to touch my hair. In fact, sometimes they haven’t asked at all, they’ve just reached out and touched it. They’ve also asked me how I get my hair to do what it does. But sadly, it didn’t make me feel special or like I had magical powers.

Exhibit B: I urge people before my speech on racism not to come up to me afterwards and tell me that they are not racist, that they have black friends and please, I beg them not to apologize for the entire Jewish community. Why? Because it’s happened before.

Exhibit C: I have had people tell me that I’m not like other Hispanic people. The racism in this statement was lost on them.

Exhibit D: I have been complimented frequently on how articulate I am and how good my English is, despite clarifying that English is my first language.

Exhibit E: People have tried to talk ghetto with me and been met with blank stares. Except when my professor told me that it sounds like I spent my childhood “on lockdown.” That was actually funny and true.

Oh well, do you think that perhaps Brazilian president Luiz Inacio Lula da Silva was trying to be satirical when he blamed the global economic collapse on Western bankers with this quip: “This was a crisis that was fostered and boosted by irrational behavior of people that are white [and] blue-eyed.” Okay, probably not.

5 thoughts on “Black People Love Us!”