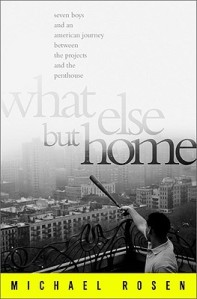 My mother used to slap us if we spoke slang. And while she never sat down to help us with our homework, as far as I can remember, she would slap us, too, if we didn’t get it done. Acting ghetto and talking ghetto alike were a big no-no in our household. My mother thought the ghetto was toxic, a poison she feared would trap her kids if we started acting like the kids we saw at all hours of the night on street corners.

While dealing with abuse at home and being bullied by classmates in school, there was one thing that couldn’t be taken away from me. I was smart. I loved books. And the more I read, the better I did in school and the more my classmates picked on me. Intermittently, my mother, who expected us all to get good grades and go to college, would pull me out of school to take care of my siblings claiming that my grades were good enough that missing one or two days wasn’t going to affect my grade point average.

I was a fatherless child among many fatherless children in inner-city New York. I had to look for father figures where I could get them. My mother never brought men home. I didn’t even know she had a boyfriend until she told me she was pregnant again when I was about to turn 15. Of course, I was unwittingly, unconsciously looking for father figures and I was very lucky. Every once in a while, father figures would come prepackaged and delivered to me on the first day of school in the form of teachers.

When I became a teacher, I told people I was following in the footsteps of my fathers. My teacher fathers. I would not have survived without these men. Most of them were young. They didn’t have kids of their own. I don’t think they completely understood that they were acting as substitute fathers or maybe they did and they understood that this was an unsaid part of being a New York City public school teacher. These men nurtured my writing, helped me with my homework, my college essays, my scholarship applications, helped me find jobs, gave me money so I had enough to eat. And for moments at a time, they made me feel safe, even in a world where I knew I wasn’t.

I’ve just started reading “What Else But Home: Seven Boys and an American Journey Between the Projects to the Penthouse” by Michael Rosen. The book is about an upper middle class Jewish couple and how their lives were changed by, and how they changed the lives of, five poor African-American and Latino boys by making them part of their family.
In an interview with Tablet Magazine”, Rosen says, “I’m fascinated by love—you can hate in large numbers, like in the Holocaust, but love seems to have to exist in small numbers.” Not in his household.

5 thoughts on “A Broader Definition of Family”