When I came back from the Pico-Robertson area of Los Angeles where my husband was standing in as a rabbinic intern, the first thing I noticed about New York was that it was really dirty. Had the city always been so filthy or was I just desensitized to it? I suspected that it was a little of both.

When my aunt went to Italy, she commented that it was pretty dirty, too. I didn’t know what to think. I could only dream of visiting Europe. I’d never actually been, and here was my aunt telling me that Italy, the place with some of the greatest art in the world, would fail the white glove treatment a billion times over. She was really disgusted. Lucky for me, I’m mostly oblivious to dirt—my mother once decried that my sisters and I were total pigs, self-appointed princesses of a grand pigsty. Hey, we all have our faults, but what if my obliviousness was the key to having a good trip?

It’s no surprise that when I finally hit Rome two weeks ago, I thought it was pretty clean. I didn’t have to step over too much trash on my way to check out the ancient ruins. The bathrooms (almost all of which didn’t have toilet seats) were pretty neat—unless you were taking the train to Florence or Venice, in which case, watch ya step! If there was dirt in Italy, I didn’t see it. I was too busy marveling over the fact that I was in Rome! In Venice! In Florence! How in the world had I gone from being a welfare child reading about Hercules and Venus to actually visiting the statues and paintings featuring these epic Greco-Roman figures in person? I stood in front of Michaelangelo’s David with my mouth agape for quite some time. I couldn’t wrap my mind around where I was or what I was seeing.
So it was actually pretty easy to mostly overlook the fact that all the Metro trains were covered in graffiti. Some of the colors emblazoned on the side of the trains were quite vibrant. Besides, on the Metro, I was too busy checking out that Asian girl’s Hello Kitty ring (which, of course, I picked up in Venice for my sister). I was too busy trying not to laugh when an Elvis lookalike with an Italian accent crooned “Blue Suede Shoes” during my ride. There were too many strange and beautiful things to see to ever allow me to stop and think about whether or not the Italian cities I visited were disgustingly filthy.
Maybe it’s all about perspective. I didn’t go to Italy with too many expectations. I didn’t go to judge whether or not it was cleaner or better or more efficient than New York. I read the guidebook and I expected waiters to take their time and every single course at dinner (antipasta, first, second, dessert and more!) to last forever. I marveled at how far my Spanish got me in Italian. And I just knew that seeing the Sisteen Chapel up close and personal would make my entire year. It did.
Who knows, I could be quite the world traveler now, a girl could get used to sitting in coffee shops sipping lattes and writing about the world…. 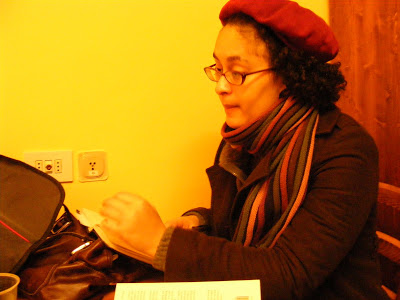 One thought on “Italy Trip Recap: Down and dirty in the city”