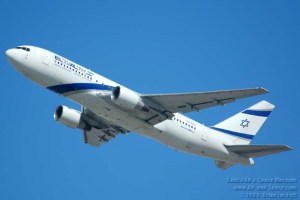 Traveling is difficult when you’re disabled and according to the article above, Delta made it much, much worst for one handicapped passenger. Though my travel experiences have been nowhere near as arduous, my first and only flight to Israel was so upsetting that I told myself that I would never fly to Israel ever again. I flew El-Al and by myself. My husband, my boyfriend at the time, was already in Israel and had been for two weeks.

While waiting in line for my boarding pass, a member of the El-Al staff asked me questions. I noticed that other passengers waiting in line were also being asked questions. But the conversations between passengers with Jewish names and staff members ended quickly. Mine lasted the entirety of the time I was on the lengthy line. Already stressed out from motion sickness and pain from the car ride to the airport, I became more and more frazzled. And the more frazzled I became, the more questions I was asked. My sister, who had had accompanied to the airport, was trudging along behind me with all my bags.

My sister was not allowed to help me once my boarding pass was in hand. Not even when we informed the El-Al staff that I was handicapped by my fibromyalgia and needed help getting around the airport. Their response was to proceed to ask me to open all my bags so they could search through them before I was even allowed to go through security. I insisted that I needed my sister’s help to open the bags because that my disability was so severe that doing what they asked by myself would cause incredible amounts of pain. They refused to allow my sister to help me. I burst into loud sobs as I fumbled to open up the bags. I had had neither the strength or the energy to pack the bags myself, my sister had prepared everything for me. As the pain started to course through my body because of the repetitive functions I was performing, my sobs turned into wails.

My sister was fighting the urge to be completely hostile as she blinked back angry tears. She hated seeing me treated so harshly. Once they were finished examining my bags, they insisted that I close them by myself. I became hysterical. My sister became obnoxious. At that point, they allowed my sister to help me close the bags. When they finally assigned an escort to me, she left, probably imagining that there would be someone to help me.

The escort followed me through security, helping me with my carry-on luggage. At security, I was stopped again. Again, I had to open all my bags and have them searched. On top of this, they had to have someone pat me down. I begged them to be careful, explained that having people touch me was painful, a side effect of my disability. They looked at me incredulous. I cried as the nerves on my body screamed from being touched.

The escort was cool, not very chatty, but she asked questions. Lots of questions. Doped up on my pain medication, I didn’t give her questions any thought. I answered them honestly. I was so glad someone was treating me like a human being. It was over an hour before I would realize that she was actually interrogating me. When I told her I had to go to the bathroom, she told me that I had to leave my bags with her. I wasn’t allowed to take them to the bathroom with me. I couldn’t be trusted. By the time that boarding time came, I was in tears again. Stressed. In amazing amounts of pain. Not looking forward to arriving in Israel at all or ever flying El-Al again.

One thought on “The not so friendly skies”